Seth J. Moore
Sometimes I put stuff on the internets.

It would probably make a good screensaver

Before taking Intro to Game Programming in the fall of 2012, I decided to get a feel for using Microsoft's XNA Framework, which we would be using in the class. This would also give me a chance to get more practice with C#, to build on my recent introduction to it in the Graphical Application Development class I had just taken. What I came up with is pretty basic, and doesn't look like much, but I find it sort of mesmerizing to watch and play around with. 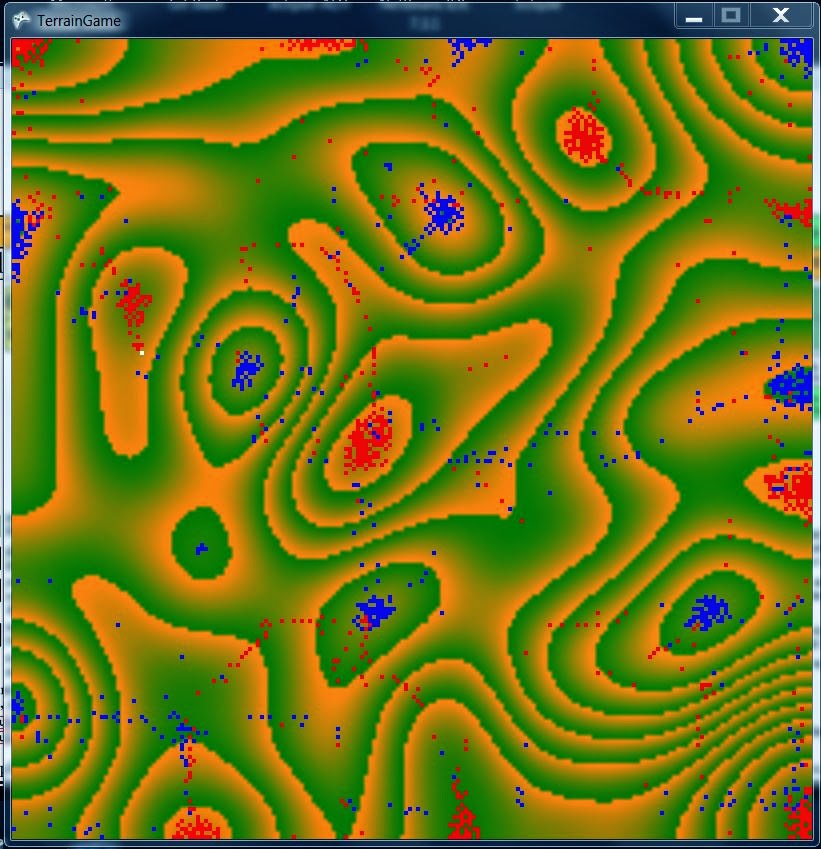 I don't think I knew what direction I was going to go with it, so I called it TerrainGame because I started out by working on creating a randomized terrain with hills and valleys. As you can see from the image above, I ended up with a sort of contour line representation of the terrain, with each interval between lines going from darker to lighter for lower to higher elevation.

After being able to create random terrains, I came up with the idea of adding critters that base their movements on the terrain. In the code, red critters are called Divers, and blue critters are called Climbers. Divers always seek the lowest point, except when they head higher to mate with Climbers, and vice versa. This pretty much covers what the "game" does (see the GitHub page for full functionality), but in order to make it  a bit more game-like, I created a Rider, which is a white square that rides on a critter, and can be moved to an adjacent critter with the arrow keys.

You can check out the full code over on GitHub, if you like, but I'll also include a link to an executable (doesn't work), which I'd like to hear about whether it works for anyone or not.